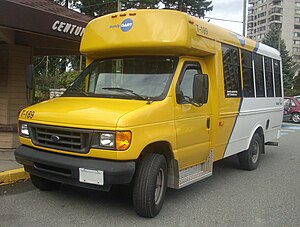 British Columbia’s Metro Vancouver public transit system is run by Translink; and they announced recently, that they are going to scrap a system by which people entitled to “HandyDART” access — which is a door-to-door minibus service that seniors and disabled folks can book — can  buy coupons to pay for 50% of taxi fares to supplement the service. 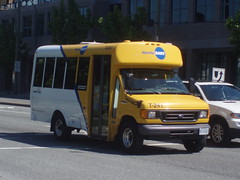 Translink feels that improvements to the HandyDART service — increasing it to 18 hours a day which includes evening until midnight — as well as the fact that nearly all public transit buses as well as other modes of transit are “accessible”, renders the TaxiSaver program unnecessary. The money saved by scrapping the program will be used to increase usage of taxis used to supplement the HandyDART service. Taxis are used when HandyDART vans aren’t available and using a taxi won’t compromise client care.

They expect to save $1.1 Million over the next 3 years and will be reinvesting $200,000 into the supplementary taxi service. (Facts from The Vancouver Courier) 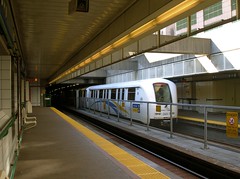 This might seem reasonable at first. A person in a wheelchair or using a walker can book a ride on the HandyDART to travel from doorstep to doorstep with an attendant for the price of bus-fare basically. They also can ride any transit bus and all the elevated rapid transit trains — SkyTrain — or cross harbour passenger ferry — Seabus — or the commuter rail — West Coast Express — as they are all “accessable” now. Of course I guess taxis are still an option, though at full price. 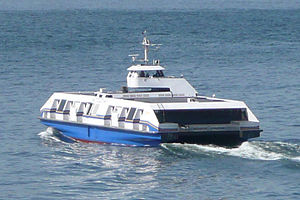 On the other hand…

As I am led to understand, you can only take the bag or two you can carry when on the HandyDART. On public transit of course you might take a two wheeled grocery cart, if you can manage it with your wheelchair, mobility scooter, walker, or cane. Mind you, There is limited space on those accessible buses for scooters and chairs … and strollers, walkers… and once those are taken, there is no more room. The buses I take often have those spots filled. A driver might not take on someone with a grocery cart when someone on board has a baby stroller. 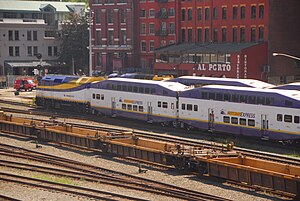 Even then, a person can only put so much in a two wheeled grocery cart. When you take a taxi you might do two or three weeks grocery shopping. That means only one trip every two or three weeks which makes a difference to a person who can’t get out much.When you are taking the bus things just might not work out — you might not be able to get from here to there.

For instance, you might walk 250 metres to the bus stop and take a bus 500 metres before transferring to another bus. which will take you 1 or 2 more km to where you get off and walk another 250 or so metres to the store. Then you still have to get the groceries before reversing the process on transit — With the groceries in that two wheeled cart. Of course since you can only get 1 week of groceries — if you can fit in a weeks worth or carry that much — you have to do it again each week. This is not so easy when to start with you have health issues and probably stamina issues. 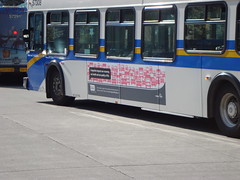 The HandyDART won’t allow you to take enough on to do your groceries You also can’t bring other larger purchases that might fit into a cab. Public transit also just won’t work for many due to stamina issues and the complexity of handling a cart or grocery bags on a bus. Taxis are expensive and the TaxiSavers helped a lot. What else is there really?

Then there is the issue of needing to book the HandyDART in advance. Some things are just not bookable. Also from what I hear, people are unable to book rides because HandyDART is overbooked already. Perhaps the influx of more money might help, but then also there will be more need.

The TaxiSavers only paid half of the Cab-fare. The client paid the other half — so I figure it likely wasn’t abused.

Removing it seems a step back.