Occupy Canada might sound a bit odd considering all those “Occupy” protests in the past year or so. What I am proposing and talking about is a bit different, though perhaps every bit as radical. 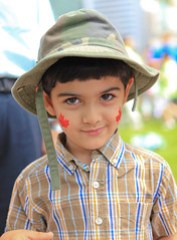 In some ways we have stopped actually occupying Canada. Oh, we live here — but do we occupy this land? I mean do we occupy it as the people who are in control of this land of ours. Let us for the moment forget native land claims and forget issues of immigration.

Did you vote? Not just in the Federal election; not just in the Provincial election; but how about in your Civic elections? Do you take part in town hall meetings? Do you know belong to a strata development or live in an apartment and are their any issues pertaining to it? Do you take part in strata council meetings? Do you know the issues pertaining to your community on the small scale and on the large scale? Do you know the people running for all parties as well as the independents. Do you belong to any political party? 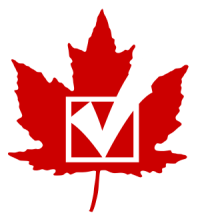 If you don’t know the issues concering your small corner of the world or the larger part — do you truly occupy the country you live in? Or are you just a passenger on an amusement park ride.

I know we can’t be experts in all the issues. It is just like a politician can’t be an expert in all the issues. That is why a politician — if the politician is any good at all — will have a network of people they depend on for advice when it comes to making decisions. I don’t mean “yes men” or “puppet masters” or people to make decisions for them. I mean people that understand the specialized fields who can give advice and explain the issues. They do have to be trustworthy and it would be advisable to have counsellors on all sides of any issue.

In any case, it is good to be educated and have good sources.

It isn’t easy to have a say in government today.

Sometimes it seems like everything is polarized. You are faced down with a boiled down version of a few issues and told that you have only to chose between option A and option B. Of course one side says the other is the road to ruin. If Side A gets a majority, then Side A gets to make all the rules. If Side A doesn’t get a majority, then Side A has to be a bit careful and moderate least Side B has a chance to vote them out and have a new election. That all gets a bit messy. 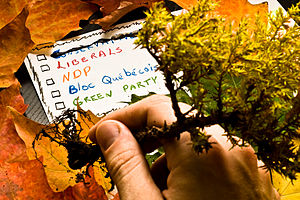 Image of a list of the major political parties in Canada. The date is October 14th! Canadians, go vote! (Photo credit: Wikipedia)

Perhaps it is less messy in more polarized places where politics has been filtered to just two choices. Here, in federal and provincial politics, while often it seems, or the major parties like to think it is a two party race each “go round” there is a lot of jockeying around. Quite often the party in power finds itself there because the other parties have split the vote.

Unfortunately, although your elected official for your riding is supposed to be representing you — the almost always will vote the party line. I think there are more upsets in municipal and provincial politics than federal.

However that being said, if a party in power, is unpopular with the majority of the population for most of the time — how come, come election time, it still is voted back into power?

Perhaps people just aren’t remembering to a time before the election was called? Perhaps they don’t like the alternatives? Perhaps it is time they joined a political party and helped put a good alternative into place that people might want to put into power?

Perhaps they might want to occupy their place in Canada? Perhaps people should simply take part?

But! There is more to taking part than voting! More to Occupying Canada than voting — and I do not mean parking in a park or protesting in a public square.